Fan Designs a Novelty Hat and Hires Artist for Promotion

A Green Bay Packers fan designed a special hat to wear in time for the 2015 season. After the football team's loss in the 2014 NFC championship game, Jason Spafford, a Minnesota resident who hails from Wisconsin, wanted to make a comeback by creating a new cheese hat -- a novelty headgear worn by loyal Packer fans. He designed a mozzarella string cheese hat that featured two can holders and a slot for a flask.

Originally conceived 20 years ago, the fun idea was supported by many but it took a while for it to materialize due to Jason's busy career as a producer, writer, and director.  To finally make it happen, he designed the first version and took it to a manufacturer for fine-tuning. He then started a Kickstarter campaign to raise funds for manufacturing and legal fees. Kickstarter is a popular crowdfunding site where people raise money for different projects. Jason's goal is to raise $10,000.

To promote the campaign, he thought of a fun 2D animation that would explain the features of the hat. "We were looking for an inexpensive way to get across all the information about the String Cheese Hat and a video seemed the most effective method. I wrote the script and created storyboards, while my brother Justin provided the voice over." 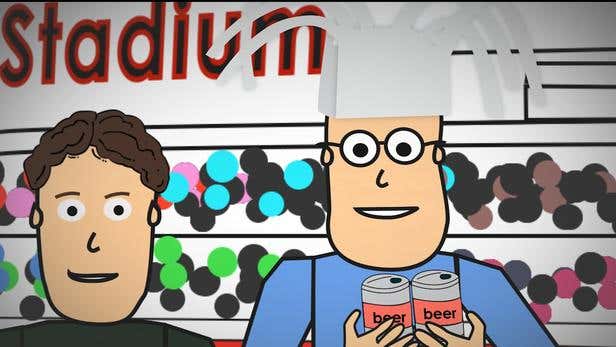 He searched for someone locally to do the video, but no one could complete it in a 10-day timeframe. "The people I knew were all busy so I searched online. I found Freelancer.com and immediately liked the layout and interface. The reviews about the site were also helpful," said Jason, who hired the freelancer Rocketavideo from Ukraine. Jason liked his work samples and his responsiveness.

"I did some research to see what a fair wage would be. We agreed on $600 for the project and it ended up being a fair price for the freelancer. If sourced locally, I would have paid between $1,700 and $2,000. I paid an extra fee for assistance with the search. This optional service is helpful for first time users and well worth the fee."

The video is now up on the Kickstarter campaign page. "We're promoting it through Facebook and we've gotten some newspaper stories and television exposure. We are reaching out to sports fans and letting them know about it," said Jason.

Depending on the amount pledged, backers will get rewards, such as the String Cheese Hat, a flask, playing cards, a hoodie, a week-long stay at a Northern Wisconsin cabin, and branding rights for the hat during the first year of release (for the highest pledge). Another reward is the creation of a 2D animated short for personal or business use. Jason will be hiring Rocketavideo once again for it.

After acquiring funds, he will prepare for an initial run of about 500 to 1000 String Cheese Hats and it will be sold for $20 each. 10% of all profits from sales of the hats will go to the SE Wisconsin chapter of the Alzheimer’s Association.

The String Cheese Hat will be 15" tall, white, and with sides peeled down (resembling string cheese) to provide easy viewing for fans seated behind the hat. Chicago Bears fans will need to replace the cheese grater hats they sport during Packer games because this cheese hat peels.

Wisconsin is known as one of the largest producers of cheese in the United States and its residents were given the nickname Cheeseheads. Originating as a derogatory word given by Illinois football fans against opposing Wisconsin fans, the moniker was embraced by Wisconsinites. The first Cheesehead hat was sported in 1987.

Make your ideas a reality by hiring freelancers. Post your project now!

Dos and Don'ts in writing your Freelancer Community article

Freelancers have the incredible flexibility to work nearly anywhere. If you ever find yourself international consider some of these tips.

Are you looking to become a successful freelance math tutor? This article will guide you through the process and provide all the tips you need.