Create a comic with six bullets 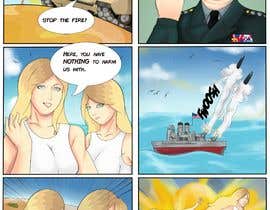 I need someone to draw me a comic with six bullets.
Style: cartoon, caricature.
The model of the comic is the pencil sketch that I have made, and it is in the images with the name of comic model.
Well, it is a bit of a bizarre story. The action takes place on a beach. The comic tells how two twin giantesses are on a beach, by the sea, and the US Army tries to prevent them from moving further inland. The setting would be the sand on the beach.
The tanks stop firing because their shells do not harm giantesses. That upsets the American general. The giantesses say: Here you have nothing to harm us with.
At that time, in the next bullet, it looks like a warship fires two missiles. In the next scene, the two giantesses look back at the noise, surprised. And, in the following scene, both girls fall knocked to the ground (but they are only knocked down, without any damage, so there is no need to put blood or anything like that).
In the images The twin giantesses model an The Twin Giantesses model 2, you can see the appearance of the twin giantesses. They are two young girls, about eighteen years old. They are both blonde, with long hair, blue eyes, and white.
They both wear the same type of dress: a very rough, white dress. The edge of the skirt reveals the knees. It is short-sleeved. In the image, you can see how the dress is. Since both girls are twins, you can draw them with the same look.
I imagine the general as a grumpy old man, with a big white mustache, and an American Army uniform. (You can see the image General Ross as a model)
The tanks would also be North American (M1A1 Abrams)

The final destination of the comic is to publish it on Deviantart. It´s to illustrate a story. If you want to see the story, to find inspiration to help you draw it, the link of the story is here:

The final destination of the comic, therefore, is to be published on the internet. It is not for printing, but so that it can be seen on the screen of a PC or a smartphone.
You can make the comic how you want: in black and white, or in color, but the better and more complete it is, the more possibilities there are to win the contest.
If you need any clarification, ask what you want.
Have fun!