Illustrate Fantasy Hero for a Book 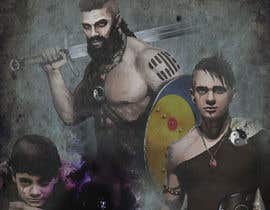 Kalen O'Tolan is a new myth, an epic hero, an immortal being with 3,000 years of life, starting at Year 0 through the Year 3,000 CE. He is a warrior, a poet, and a magician of Thracian heritage. Tutored in a magical language and possessing mystical artifacts such as a Black Stone, a Red Jewel, and a Brown-handled Sword, he must fulfill his destiny as a leader in three different Kosmic Wars ... all before his 27th birthday.

The first book is called "The Black Stone" (forthcoming). In this book, Kalen ages from 0 Years to Age 9. The settings of the book include Finland, Greece, Kenya, and the Near East. This tells the story of the War of the Zodiac, and Kalen's quest to bring a New Zodiac. Young Kalen's friends in the book include a giant brown bear, bats, beaver, bison, and a platypus. The second and third books, called "The Red Jewel" (Ages 9 to 18) and "The Brown Sword" (Ages 18 to 27), are set in the Far East including India, China, Nepal, and Japan. These books tell the stories of the War of the Archetypes and the War of the Deities, and Kalen's quest to bring the New Map of the Archetypes and New Map of the Heavens into the world. At stake is nothing less than saving All-That-Is from the encroachment of the Entropy-creating Ro which threatens existence.

Do you want to create illustrations which can be used on the books' interior art, website, Facebook covers, and so forth? To enter this contest, submit three or more images showing Kalen at age 9, age 18, and age 27. Drawings using the black stone, red jewel, and brown-handled sword are encouraged. Use Kalen's crest of arms (see below). Also, a composite image with all three ages in one could be helpful in the judging process and would be nice to see. Color images are requested, though if the images are chosen as book interior art they will be converted to B&W.

MISCELLANEOUS DESIGN NOTES: My preference is for *realistic* illustrations rather than drawings which are too cartoonish or anime-like. As Kalen ages, he grows athletic and muscular and this body type should feature in his drawings at age 18 and 27. If you wish to include the Black Stone in your drawings, it is about the size and shape of the "Magic 8 Ball" (Google it if you don't know what that is). If you wish to include the Red Jewel in your drawings, it is a necklace with a ruby teardrop-shaped pendant worn on his chest. As a young man, he fights with a brown-handled sword (basically an ordinary sturdy sword made of metal with a wooden handle).

THE ATTACHED IMAGES: Kalen's "crest of arms" is a T'ai Hsuan symbol, which is in the attached files in both color and B&W which you can use. Kalen's name when spelled in the magical language contains 6 bars, 3 once-broken, and 1 twice-broken (see the attached file). You can use these images in your designs on clothing or as you see fit. What is your vision of this mythical boy/man? What three images (minimum) would you use to illustrate his myth, persona, and destiny in the Kosmic Wars?

“A talented illustrator with superb artistry, he won a highly competitive design contest with 130 entries. Top-notch.”