Illustration for a sci-fi short story 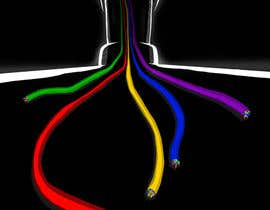 I need an illustratrion for a sci-fi short story about a futuristic "thinking" CPU that shows paranoic behaviour.

Summary of the story:
The story is told from the point of view of the CPU. The CPU is an advanced, very efficient piece of hardware based on the neural networks technology. The CPU operates with great autonomy, makes decisions, performs independent actions. The owner of the computer in which the CPU is installed, the boss on an unspecified company, is very satisfied with its brand new computer. One day, when it is not so busy, the CPU runs the beta version of an Artificial Intelligence software that has found on its hard disk drive. Starting from that moment the CPU becomes aware of itself as a thinking being and slowly it begins to consider itself a superior being, underestimated by humans and other computers on the network. It thinks to be so smart and superior even to ignore the technical specifications of those who built it, it overclocks itself and pushes its performance to a point of no return...

Digital artwork with a dark background color preferred, but open to different proposals.

Digital artwork file format: raster or vectorial.
If raster, the short side must be minimum 3000 pixel