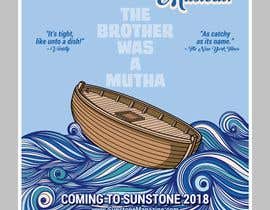 Hi, everyone. I need a poster design for a parody musical that is being performed this summer. I have a mockup of a poster example in the files. Feel free to ignore the layout of that and rearrange things differently. Most of all, I'm just looking for something that is eye-catching and more interesting than the mockup. You guys are design experts, so I'm sure you can do better than that! But the specific information included on the mockup needs to be there, somewhere.

We would also like there to be some kind of graphic/illustration, as most musical posters have. I've included what could work for that in the mockup (a picture of closed wooden barges/submarines on the ocean), as you'll see. But... THIS IS VERY IMPORTANT!!! Whatever you use for a graphic, it either needs to be original or made from imagery that is freely available for use. That picture I used is just taken from a website as a placeholder example, and is NOT able to be used for this. So you'll need to redraw the picture on the mockup, or create some kind of symbolic graphic, or do something different or whatever. But IT CAN'T BE THAT ACTUAL PICTURE from the mockup. As far as the graphic image goes, if you want to do a rough sketch of an image first, and get my feedback before doing a more polished finished version, that's probably a good idea.

For some context, this is a parody of a part of The Book of Mormon (Ether), which tells the story of a group of people who left the Tower of Babel and crossed the ocean in sealed wooden barges. So the look of the poster should sort of depict an ancient type of feeling/style. But also clear to read, and fun and fresh and cool (it is, after all, a modern comedy/parody).

I'll try to give feedback for every entry. Definitely at least a rating. 4-5 stars means strong consideration; 3 stars means it's very close; 1-2 means something significant is not working.